“There is no environmental capacity for additional development in the new Local Plan [2030 ono] to be supplied by with water by increased abstraction from the Chalk Aquifer. Even the current level of abstraction is widely believed to be unsustainable”.p17 here.

The Greater Cambridge Planning Service could not be more clear.

The Environment Agency publishes monthly reports on the state of water resources in England. You can access them here. The map below for East Anglia shows the orange circle and the number ’42’ for the River Cam, indicating that our river is at 42% of its normal level, which according to the scale is ‘notably low’. (The shading of the areas denotes the geology of the ground and soil below the surface – the legend at the bottom-left). 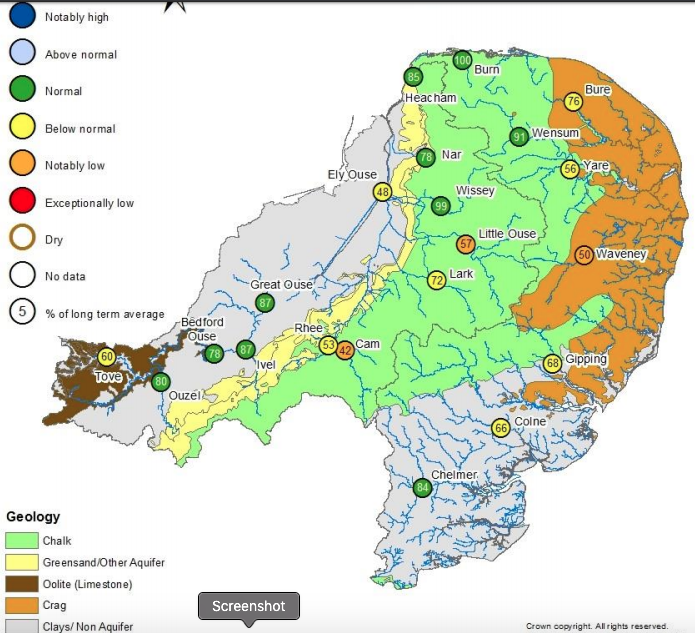 The picture does not get much better for our ground water sources. From the same document there are a trio of points where our groundwater levels are below normal. 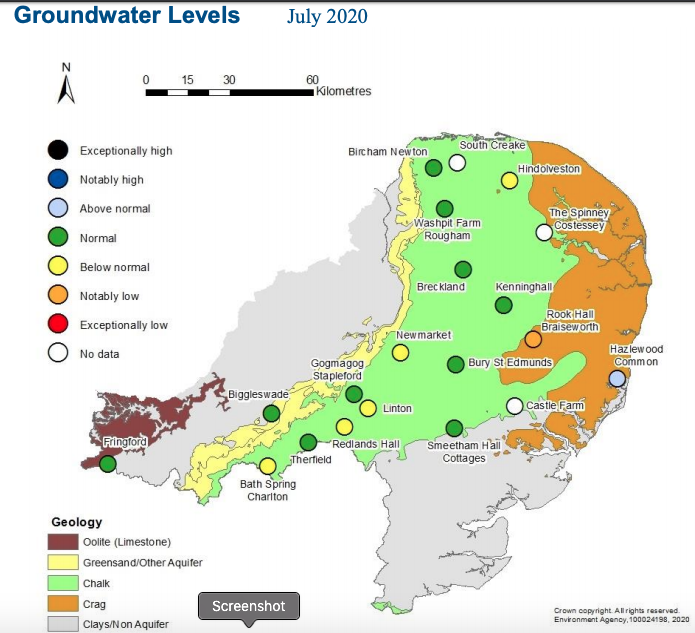 When we look at the fluctuations over the past few years, taking Gog Magog/Stapleford just south east of Cambridge near where the waterworks are, we can see that at various points the groundwater levels have fallen alarmingly low. 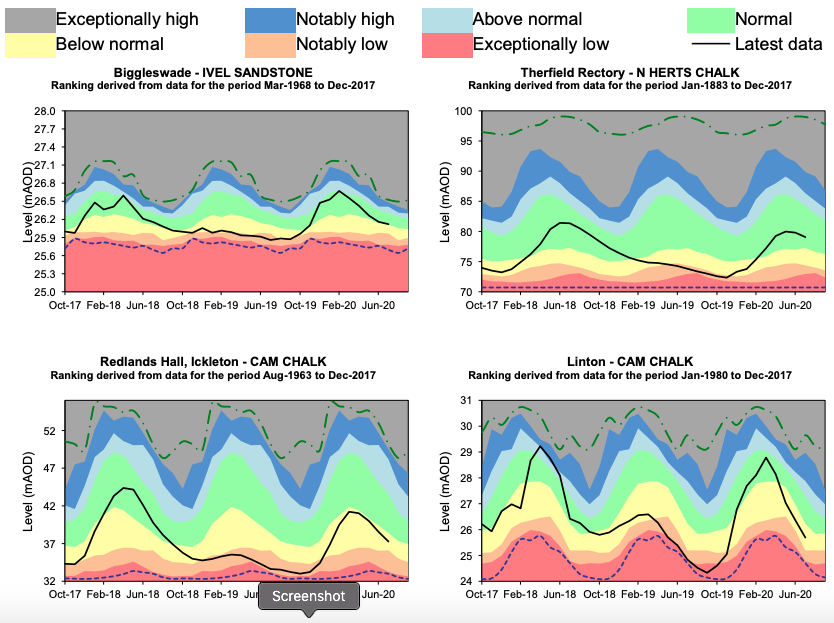 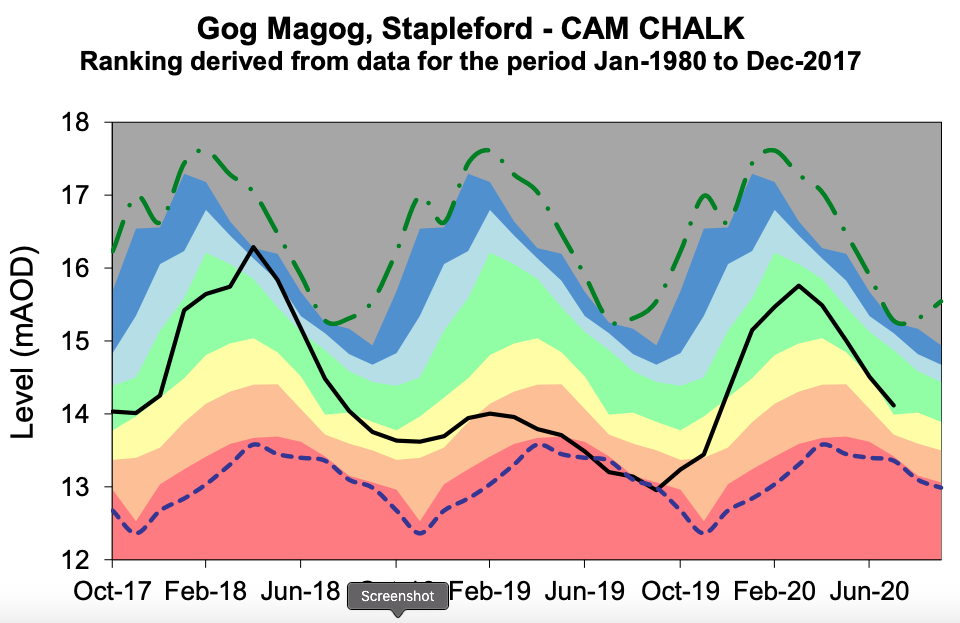 This wouldn’t be a huge problem if demand was falling or if there was not a massive house-building program looming. But the Cambridge Local Plan from 2018 puts the targets in crystal clear terms.

Above – from the Cambridge Local Plan: 14,000 new homes inside the current boundary of Cambridge City Council by 2031.

This will result in a city with 150,000 people, of which the student population for Cambridge University and Anglia Ruskin University alone will make up around 25%. Yet according to the Centre for Cities think tank, students make up 75% of the resident population in the city centre – a figure only exceeded by Oxford. When you add the additional students living in Cambridge – estimated by the Department for Land Economy at Cambridge University for Cambridge City Councilat another 6,000+, that gives us a total of over 36,000 students.

The state of the River Cam’s tributaries.

In summer 2019 I made a couple of short videos looking at both Cherry Hinton Brook in East Cambridge, and Hobson’s Brook in South Cambridge.

One of the organisations that has been monitoring the health of the River Cam and its tributaries is the Cam Valley Forum. There is also the regulatory authority for the River Cam – the Conservators of the Cam – established by Act of Parliament – the River Cam Conservancy Act 1922.

What is the working relationship like between the water companies, their regulators, planning authorities, and large developers? Who has what legal obligations?

This is what is not clear to me – and I dare say the general public, is who has what responsibilities for ensuring things like environmental sustainability are embedded in strategic planning. Such as not building on flood plains as well as ensuring decent water supplies for current and new developments. Because I’ve lost count of the number of reports and warnings we’ve had on future water stress.

The fragmentation of public administration in recent decades has made it harder to find out who is responsible for what. At least in times gone by in Cambridge you could look up in the phone book which local authority or which government office on Brooklands Avenue was responsible for what. Whether the public actually got satisfactory responses to their queries is another thing in itself! 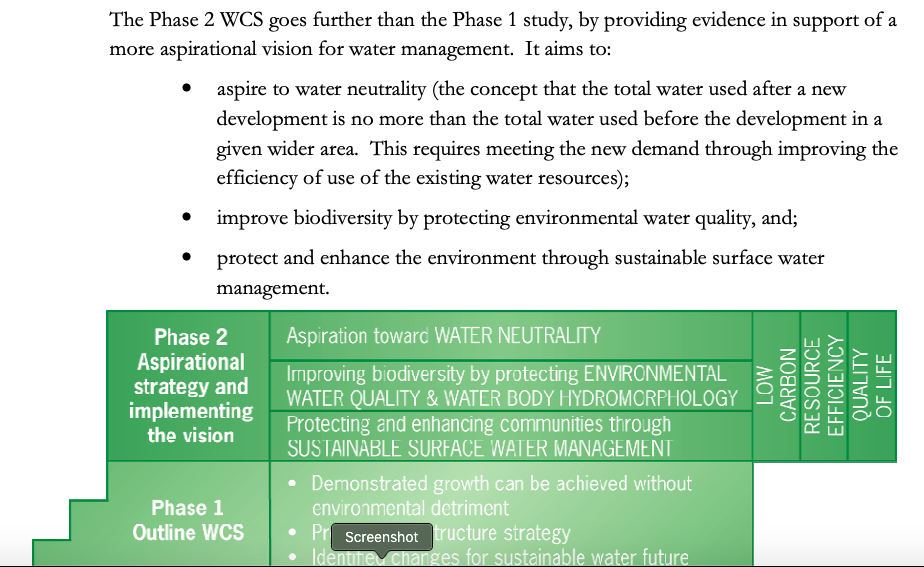 Note the aim to “aspire to water neutrality”. I’ve heard very little on comprehensive retrofitting, replacement of old and leaking pipes, installation of water storage facilities both large and small, and methods of increasing flood resilience upstream of towns and cities.

What are the reporting lines of accountability? What powers and responsibilities do ministers have with regards to regulators and water companies, and how are they going to make this accessible and understandable to the general public?

What responsibilities should Cambridge’s large institutions (and large users) have regarding future expansion?

Cambridge University and Anglia Ruskin University are easily identifiable, but then so too are some of the firms that have either relocated to Cambridge or have expanded due to commercial success and/or new investment. What’s not clear yet is whether such institutions feel any responsibility towards the city and its surrounding environment? If so, how does this manifest itself in their day-to-day decisions as well as big long term investment strategies? (I’m still saddened that Cambridge will not be getting a new rowing lake, which would give the flora and fauna a bit of a break from rowing teams on an increasingly crowded river).

For those of you interested in the health of our rivers and streams generally, Feargal Sharkey is campaigning on this and is lobbying politicians and officials on this.

The absolutely hypocrisy of this. In 2019 water companies spent over 1,500,000 hours dumping sewage into our rivers and who is it that is supposed to protect us of all of this?

…and he’s not pulling his metaphorical punches on the performance of the Environment Agency. Cambridge residents may be aware that local MP Daniel Zeichner is one of Labour’s Shadow Agriculture Ministers. Those of you outside of Cambridge can write to your local MP via https://www.writetothem.com/

If you are interested in the longer term future of Cambridge, and on what happens at the local democracy meetings where decisions are made, feel free to: