The city found out early on Wednesday morning that one of our town’s civic champions, Allan Brigham, had died. For those of you interested in Allan’s published work, see Capturing Cambridge here, which published a number of his pieces. 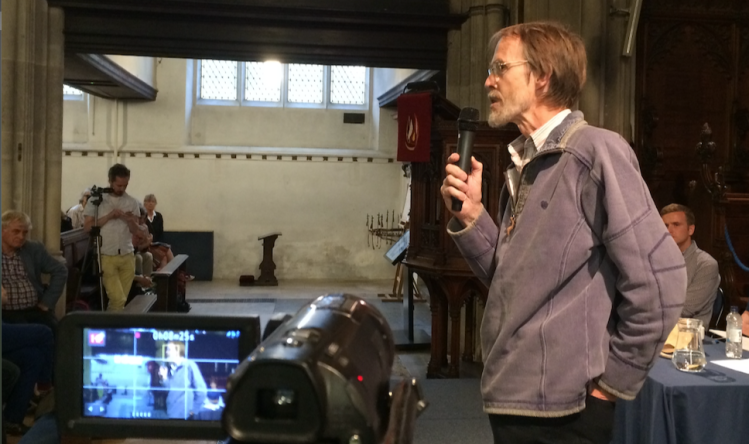 Above – The late Allan Brigham, local historian, giving a short, sharp history lesson to a large audience at Great St. Mary’s, Cambridge at an event organised by the Federation of Cambridge Residents Associations to debate the fast growth of the city. 04 July 2016. 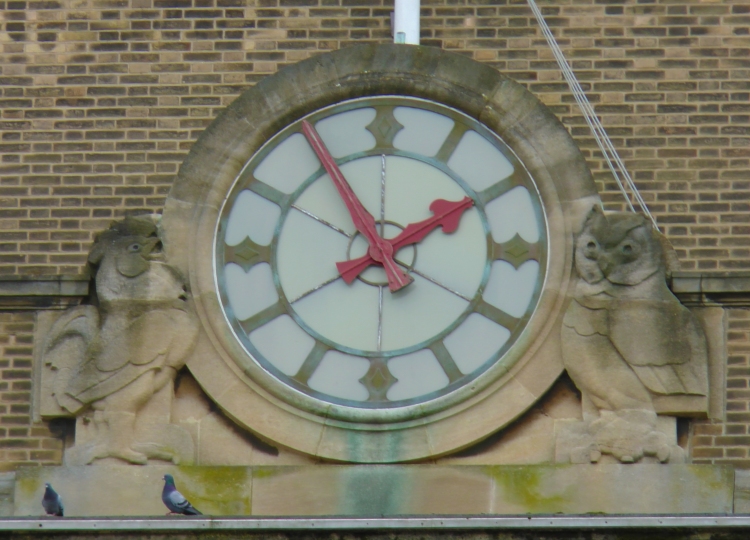 It was Allan who told me the meaning of the two feathered friends sat either side of the Guildhall Clock. The cockerel stood for dawn, and the owl stood for dusk. He actually told me that those were their names, hence adopting Dusk, the Cambridge Town Owl as the mascot for my ongoing Lost Cambridge research into the history of Cambridge the town. So if anyone asks who came up with the name, it was him.

I’ve not mentioned his relationships with family and close friends. The above will have been the sides of him that us, the people of Cambridge may have become familiar with over the years. Allan showed many of us that the historical was and is political, and vice-versa. And I don’t mean that in a negative context. The story of the modernisation of Cambridge – in particular the role that the women who made modern Cambridge had,  was incredibly political. Despite the negative lenses politics is often viewed in, Allan was very much an activist as he was an historian – as this tribute from the Cambridge Labour Party reveals. Also this from Cllr Anna Smith (Lab – Romsey).

Words can’t express my sorrow at waking up to the news of the death of @AllanBrigham . The most amazing and knowledgeable local historian, a tenacious fighter for his local community, and a truly lovely man. These pics from last year’s tour of Romsey for Mill Road Summer. pic.twitter.com/V6IaotINaR

Allan’s post-war history of Romsey Town 1966-2006 can be found here, an example of one of the many pieces of local history he wrote – this one for the Chartered Institute for Housing’s Eastern Branch. The Capturing Cambridge project published a number of his pieces (see the list here).

One of the many things I learnt from Allan is the importance of documenting and chronicling local history as it happens in order to leave sources available for future generations of researchers. His work on local history bridged the time in history from the pre-internet early 1990s to social media-savvy 2010s. As a result, many more people were able to read, benefit from, and enjoy the fruit of his historical research on Cambridge the town.

History as a story – Town not gown

“Oh the University!” I remember someone exclaiming when I replied that I was from Cambridge many years ago. I think it was at a student conference. “No, some of us just live there – there’s a town that was there long before.” was my reply – or something to that effect. What Allan’s Town Not Gown walking tours taught all of us was the importance of those local stories – the social histories of the people that made and shaped our city. Because at secondary school in the 1990s we weren’t taught any of it, and when a local history syllabus was offered at GCSE level, no attempt was made to ‘sell’ the subject to us in the way the they might have done. But then remember this was after 15 years of public sector austerity – an austerity that Allan Brigham was at the sharp end of as a street sweeper and municipal worker.

How do we keep those tours going? Something for local museums and local historical societies to ponder – including the Cambs Association for Local History and the Cambridge Industrial Archaeology Society of which he was a member of both. (New members welcome!) 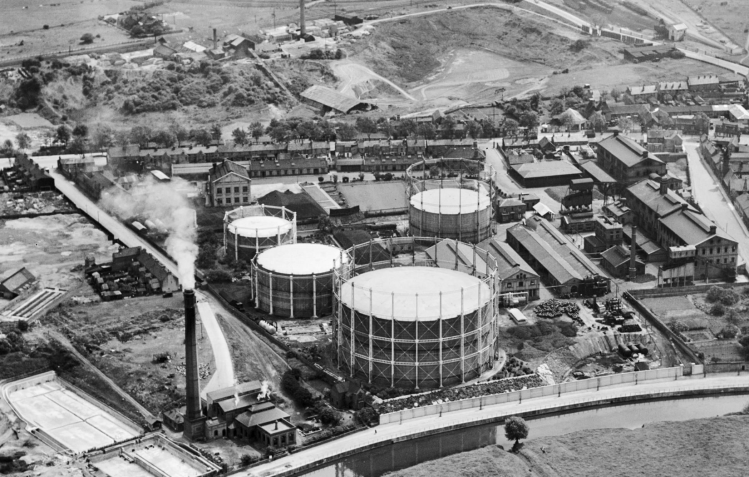 The old Cambridge Gas Works from Britain from above – today the site of Newmarket Rd Tesco. A reminder of Cambridge’s industrial past, of which Allan Brigham wrote much about.

One of Allan’s most recent publications was a Lottery-grant-funded piece for the Mill Road History Society and is an extended report on the site of The Eagle Iron Foundry – later the city council’s Mill Road Depot, now being converted into much-needed local and social housing. One of the things I’ve often said to people about Cambridge’s local and social history is that there is so much there waiting to be (re)discovered that it is beyond the capabilities of one person. When you think about the time Allan spent researching and writing this piece for one small site, that re-enforces that point. Furthermore, he set a high standard for the rest of us.

The photograph at the top of the article is one I took while filming Allan making a surprise intervention at a meeting called Supersize Cambridge – one where a number of groups and individuals gathered to express concern about the pace of growth and change in and around Cambridge. His piece is worth listening to in full.

Recall that this was a couple of weeks after the EU Referendum, when there was a huge amount of soul-searching across political parties at a time of huge national political instability. The Prime Minister had just resigned and we were still waiting to find out who his replacement would be.

One of the things all too easily forgotten in local democracy and local political debate, is local history. Allan gave an audience of hundreds a sharp reminder of previous periods of large housing growth in Cambridge. The period of the largest housing growth was in the 1800s, when as Allan told everyone, the city quadrupled in size. One of Allan’s predecessors has already written a bridge history of that era – Eglantyne Jebb in 1906 here. This is the same Eglantyne Jebb who founded Save the Children just over a decade later.

Like many of us who follow this, he also had strong opinions on this subject. But his opinions were grounded in local history, which made them all the more substantive when he responded to public consultations – ones that seem to have become less and less influential as successive ministers have curtailed the powers of local government to decide what gets built and where. Allan mentioned “The Holford Report” in the video above – this is the 1950 Holford Wright report which the city council digitised here. This was the report that recommended Cambridge be limited to a population of 100,000 people until the end of the 20th Century – a policy that he judges to have been in part responsible for the present high house prices.

Next up: Romsey Labour Club! Officer: development will provide for 37 students. See now what @AllanBrigham means in his comment re "facade". What a travesty. Lip service. Where is the sense here of Cambridge Labour past & why Romsey is so significant? pic.twitter.com/uiv5qdGwj0

Wendy Blythe, who chairs the Federation of Cambridge Residents’ Associations is another hard-working figure who provides that additional much-needed scrutiny of local planning issues all too often missed by the rest of us. The case here was one he had campaigned on with local residents in Romsey – the old Romsey Labour Club which closed in the mid 1980s. I wrote about its history in this article around the time the local community was trying to fight off plans for an inappropriate development.

Depressingly, the developer was able to secure the planning permission for serviced apartments after a previous attempt at student accommodation was turned down. Both types of developments are exempt from provision of social housing due to planning policies from Central Government. What has since happened is the developer has put the site up for sale, worth substantially more with the attached planning permission. So if you have a cool £2.5million, it’s yours. Personally I’d like to see the site converted back into a community centre. Perhaps in this current economic climate it is wishful thinking that even a city as affluent as Cambridge could acquire the site and pay for the conversion (The total bill would probably be over £4million – hence this idea for such proposals). But if Cambridge was going to build a new community facility in this part of town, Allan would be a wonderful figure to name it after.

Allan Brigham: 1951-2020. Local historian and champion of Cambridge the town.

“Allan gave us a sense of pride and place in our home town and stirred our enthusiasm to discover more. He reminded us that – in this city of high walls and high culture – greatness comes in many forms – we can still contribute and shine, just as we are.” Hilary Cox Condron