TL:DR And they cannot all be built in the same place.

I was looking at the population projections for Cambridge while going through some more planning related documents. (I don’t get out much – even without the lockdown!) You can see the projections and other data sets at Cambridgeshire Insight here. Before I start, a reminded that Cambridge and South Cambridgeshire have not solved the water shortage issue. 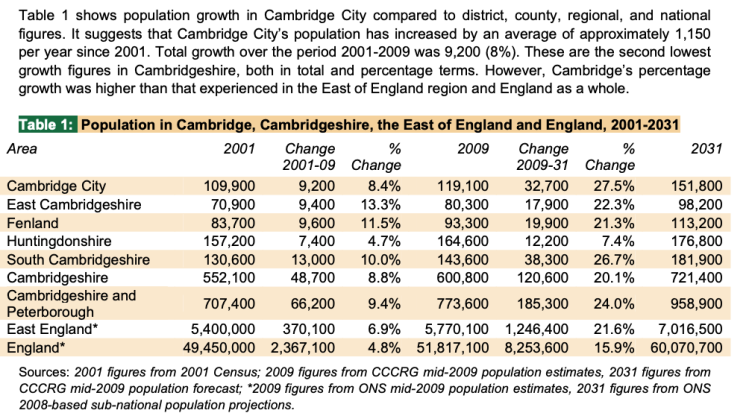 Above – from the Cambridge 2011 demographic & socio-economic report (South Cambridgeshire’s one is here).

There are many more Cambridge & Cambridgeshire datasets that can be interrogated on Cambridgeshire County Council’s open data pages here. Useful given how estimates inevitably change over time. Compare the estimate of 2031’s population for Cambridge made in 2011 above, with the one made in 2015 below.

Above – population forecasts for Cambridge, made in 2015, from Cambridgeshire Insight.

Comparing the Cambridge I left in 1999 (to go to university in Brighton) with Cambridge 2021 – Eglantyne Jebb’s comments from 1906 apply here too.

Cambridge’s population was just over 100,000 when I left. Only recently have I recently discovered my manuscript diaries from that time. The Cambridge it describes is not a pretty picture. The Cambridge we now have has a population closer to 150,000. And that’s not including the tens of thousands that commute into the city every day. For a town or city to experience an increase in population of over 50% in under 25 years is significant. This is the equivalent of adding a medium sized town. A question that then follows is: Has Cambridge built the leisure facilities needed to serve that additional population – facilities that you’d expect to see in a medium-sized town? To which the answer inevitably is ‘No’. There are many reasons for this – land prices/speculation being just one.

For those of you that follow Lost Cambridge, my town history project, you’ll be more than familiar with the founder of Save the Children Eglantyne Jebb, and her work in Cambridge before setting up that charity. The Church of England named a feast day after her. 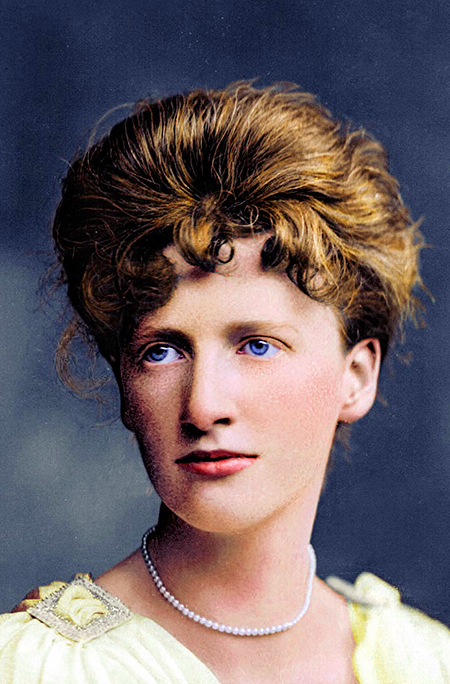 Above – Eglantyne Jebb from Palmer Clark in the Cambridgeshire Collection, colourised by Nick Harris, commissioned by Antony Carpen.

Eglantyne researched and wrote the first social scientific study of Cambridge town in its history, published in late 1906 and digitised here. One thing she informed readers of in the town’s campaign against poverty was that throughout the 1800s, the population of Cambridge the town *quadrupled* from just under 10,000 to just over 40,000 – and that’s not including the expansion of the borough boundaries that would incorporate Chesterton, Cherry Hinton and Trumpington. (Chapter II – The Beginnings of a New Cambridge, if you’re interested). It took another hero of Cambridge to remind us of this was the late Allan Brigham in 2016 in this speech to residents and campaigners concerned about the impact of the fast growth of Cambridge.

Above – the late Allan Brigham, local historian speaking in 2016.

“So, what do we need, where do we build them, and how do we raise the money?”

I’m still behind the concept of a permanent Mayor of Cambridge’s Fund to raise large donations to pay for medium-large capital projects, based perhaps on the set up that the University of Cambridge has in its fundraising efforts. I put these to Cambridge City Council in summer 2018 but didn’t get very far. See the transcript here. 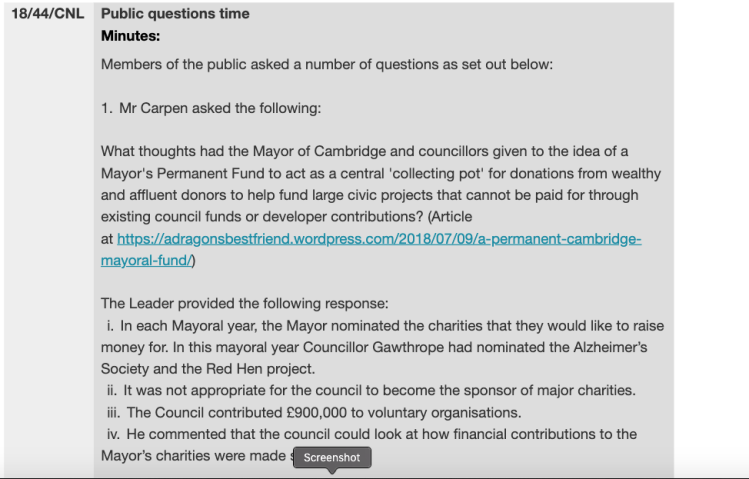 Above – screenshot from the minutes of a debate between myself and the Leader of Cambridge City Council, Cllr Lewis Herbert (Lab – Coleridge) on the merits or otherwise of a permanent capital fund for Cambridge. Otherwise we’re left waiting and hoping that a wealthy individual with the knowledge, connections and interest in the people of Cambridge will step forward like Cllr Kelsey Kerridge or Sir David Robinson. (Putting a shout out now for someone wealthy to buy the old Romsey Labour Club and turn it into a community centre named after Allan Brigham – see end here). Yet even Eglantyne Jebb spoke out against the ‘Lady Bountiful’ model of Victorian charity – where wealthy gave money for good causes in return for the recipients not speaking out about the economic and structural injustices that created and kept so many people poor in the first place. Similar sentiments were shared when former Prime Minister David Cameron spoke about helping one of the local charities in his former constituency.

“Assuming we get enough money and backing, what should be built?”

I’ve pitched my own ideas including:

Above – John Belcher’s unexecuted plan for Cambridge Guildhall – rejected by in a local referendum in 1898 and again by councillors in 1913, to the loss of future generations of Cambridge.

…there are a host of others out there that have fallen by the wayside or are still work in progress.

One that recently opened – only to be hit by the Lockdown was the long-awaited Cambridge Ice Arena off Newmarket Road.

That was why The Junction got built – young people had had enough. (I still think we should have got the upside down flying saucer by Elizabeth Way bridge).

Above – from the Cambridge Evening News 09 July 1986, in the Cambs Collection, Missed opportunity for an arts centre at the roundabout of Newmarket Road, East Road, & Elizabeth Way.

The great thing about the location of the above is that it’s within reasonable reach of the otherwise underserved communities of East Chesterton and Abbey wards. While The Junction is situated ideally for me, it isn’t necessarily so for people north of the river.

Looking at those numbers again.

Note that young people were kicking off in 1981 when Cambridge’s population (without students – hence the fall in population) was just under 100,000. At what point do other parts of Cambridge start needing leisure facilities that cover not just serving a ward or neighbourhood, but beyond it? Furthermore, how can we ensure that such venues are kept financially sustainable in the long term and that the majority of people can get there either by walking, cycling, or public transport?

Above – sites submitted by landowners as possible places for development in 2030-40. Greater Cambridge Planning.

For me, these are:

I went on a cycle ride yesterday to make a diary video for Cambridge University’s lockdown diaries project with a look at some of the newbuild communities. Every few months more new homes come on stream and more people move into them. My take remains that the developers did not plan for nearly enough community facilities to serve the new residents – The Clay Farm Centre is far, far too small. Developers should have planned for a much larger and much more magnificent premises. But they have no financial incentive to do so. In fact they have the opposite.

What those centres look like in detail should be up to the communities and those locating there to decide. Not least because each of the areas has different histories. For example would a community centre on the Cambridge Airport site want to reflect its role in aviation history? How similar/different will the demographics be of these new developments?

Comparing the Coleridge/Queen Edith’s borderlands of my neighbourhood (built mainly in the interwar period, some pre-WWI and post-WWII housing) vs the early 21stC housing of the new estates, on my cycle-ride there was a noticeable age difference on who was out and about more than anything else. There were more older people out and about in my neighbourhood than in the new-built neighbourhoods. It was also lovely to see every single play ground being used by local residents and young families. At the same time there wasn’t the presence of teenagers and young adults relaxing in the sun that there is in the larger parks of Coleridge Rec, Cherry Hinton Hall, and Nightingale Avenue Rec. (Note all of this is anecdote – it’s not the stuff to make public policy with!)

The postcode data from The Junction shows the distances that people are prepared to travel for shows and events there is far greater and wider than many had anticipated. This stemmed from an event hosted at Anglia Ruskin University where a number of people from across the city gathered to hack a series of data sets from public organisations and venues. When the anonymised postcode data from The Junction was plotted on a map, it revealed that people were prepared to travel far greater distances to see shows than they had anticipated. A few years later I found out at a neighbourhood event in Coleridge ward that people on the venue’s doorstep did not know much about The Junction, did not receive any publicity, but were more than willing to get involved and find out more.

I’ve lost count the number of times I’ve seen something on where either the distance or lack of public transport has put me off from going. Not major things – but things worth bearing in mind on accessibility. Hence why future transport plans for Cambridge & South Cambridgeshire need to accommodate sports, arts, and leisure venues rather than focusing on commuting and the rush hours.